Go Directly To Rewards
Welcome to the PledgeManager for Vaesen RPG – Mythic Britain & Ireland!
If you missed our campaign, don't dismay! Just choose an option below.

Leave the Mythic North and set sail for the mist shrouded isles of Mythic Britain & Ireland. Explore the fog shrouded streets of London, discover the secrets of Rose House and the British Society. Discover the islands and walk the moors in search of long lost tales and ancient remnants.

But that’s not all! This campaign also includes Seasons of Mystery, a book filled with four new spine tingling cases for the game. Written for use in the Mythic North, each mystery also contains advice so that it can be used in Mythic Britain and Ireland as well.

These two books expands Vaesen – Nordic Horror Roleplaying to new horizons and will be produced with the same high quality as the original rulebook. Join the Society and discover the horrible truth behind the old tales!

CONTENT WARNING: The old folk tales often expressed dark and mature themes, and thus the Vaesen RPG explores such themes as well. This is a horror game and not suitable for children, at least not without the Gamemaster first modifying the content.

In this book you will find a complete guide to the supernatural British Isles and Ireland including the great city of London, the countryside beyond, and the four nations that occupy the islands: England, Wales, Scotland, and Ireland. The union, based on conquest and maintained by force when necessary, is fraught with cultural differences and ancient grievances. National and regional differences are further complicated by conflicts between the declining nobility and the rising industrial class, between the wealthy employers and the struggling workers, between the native townsfolk and the new arrivals — and between the mortal and supernatural worlds.

In this case book, we present four brand new Mysteries spanning four seasons across The Mythic North. Similar in format and scope to our previous case book A Wicked Secret and Other Mysteries, this volume will feature four mysteries by four different writers. These adventures take place in the Mythic North setting of the original game, but includes notes and guidance are provided for running them in Mythic Britain & Ireland as well.

Welcome to the Mythic North. A land where the myths are real. A cold reach covered by vast forests, its few cities lonely beacons of industry and enlightenment – a new civilization dawning. But in the countryside, the old ways still hold sway. There, people know what lurks in the dark. They know to fear it. Vaesen.

Vaesen – Nordic Horror Roleplaying is based on the works of the acclaimed artist and author Johan Egerkrans and presents a dark Gothic setting steeped in Nordic folklore and old myths of Scandinavia. The game mechanics use an adapted version of the award-winning Year Zero Engine.

"Vaesen is a fresh and interesting addition to the horror/mystery tabletop genre and one with far more character than all the shoggoths and elder gods that usually hang out there." – Editors Choice, Comics & Gaming Magazine

Industry legend and veteran RPG writer Graeme Davis is the author of many roleplaying books and supplements, such as the classic campaign The Enemy Within for Warhammer Fantasy Roleplay. He has also contributed to Vampire the Masquerade and Colonial Gothic as well as computer games such as the Total War series.

His career has been driven by a lifelong interest in history, myth and folklore, and especially in the monsters that haunt a culture’s stories. Davis has written books on fey and undead creatures around the world, as well as a survey of werewolf lore and retellings of Greek and Norse myths for adults.

A native of the UK, Davis studied European archaeology at one of Britain’s leading universities and has published books and articles on the Romans, the Vikings, and the Middle Ages for readers from 5th grade to adult.

Johan Egerkrans is a critically acclaimed Swedish illustrator and author. Drawing and doodling has always been part his life – at age two he picked up a pencil and haven’t quite been able to put it down ever since.

Johan has worked as a professional illustrator and concept artist for more than two decades, producing artwork for books, games, comics and films. In recent years he’s picked up writing as well, and has written and illustrated a number of hugely popular books including: Vaesen about scandinavian folkloric creatures, Norse Gods about, not surprisingly, the Norse gods and The Undead, which sinks its teeth into the lore of vampires and revenants from across the Globe.

He’s also obsessed with paleontology and has to date made four books delving into the natural history of dinosaurs, pterosaurs and other extinct critters.

In addition, Johan has worked on covers and illustrations for a number of internationally acclaimed authors such as J.R.R Tolkien, Astrid Lindgren and Isaac Bashevis Singer.

All add-ons will ship together with the rest of your rewards from this Kickstarter. (If you want to get these items immediately, you'll find most of them in our webshop.) Please note that add-ons can incur additional shipping fees.

Unfortunately, import laws and customs in some specific countries have made it impossible for us to ship to them. We do not ship to: Belarus, Brazil, Russia, Ukraine, Kazakhstan and Afghanistan.

Retailers, we're looking for you! We don't have a retailer pledge for this campaign, but we love friendly local gaming stores all over the world and want to forge an even closer relationship with you. So, if you run a gaming store, please drop an email to sales@frialigan.se if you're not already on our newsletter list. We can offer retailers early release information, help you find stock of our games from distributors, and more. Let's talk!

Free League Publishing is a Swedish game creator and publisher dedicated to speculative fiction. We have published a wide range of award-winning tabletop roleplaying games and acclaimed art books set in strange and wondrous worlds.

We have also published the art books Tales from the Loop, Things from the Flood, The Electric State and The Labyrinth by internationally acclaimed visual artist Simon Stålenhag, as well as the illustrated edition of the Lovecraft classics At the Mountains of Madness and The Call of Cthulhu by the praised artist François Baranger. 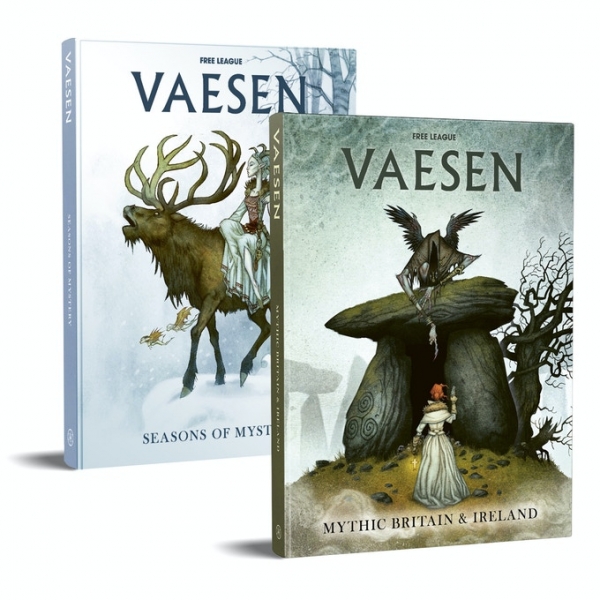 Get both Mythic Britain & Ireland and Seasons of Mystery in printed and PDF format. Includes all unlocked stretch goals.

All you need get started playing Vaesen. 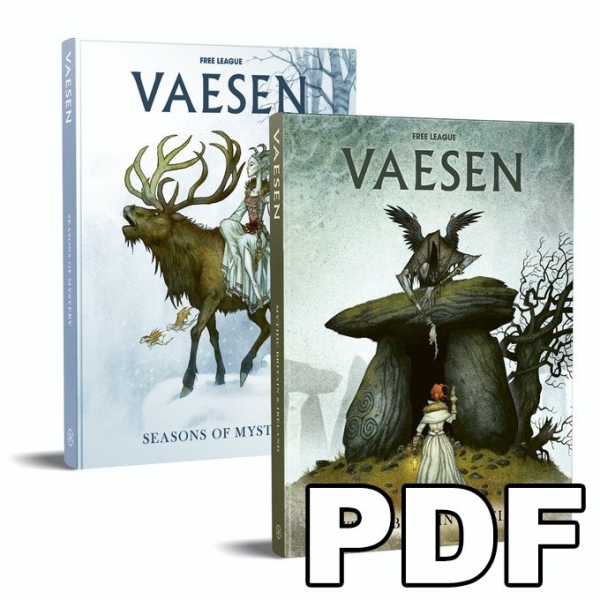 The Mythic Britain & Ireland and Seasons of Mystery books in PDF format only. Includes all digital stretch goals.

Please select or upgrade your reward to the physical 298 SEK level or higher to purchase add-ons or physical copies of the book. 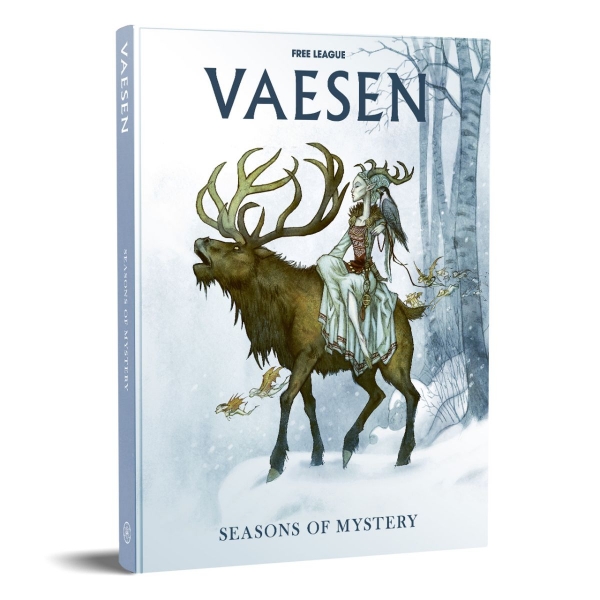 Seasons of Mystery in PRINT

The Seasons of Mystery case book in printed and PDF format. 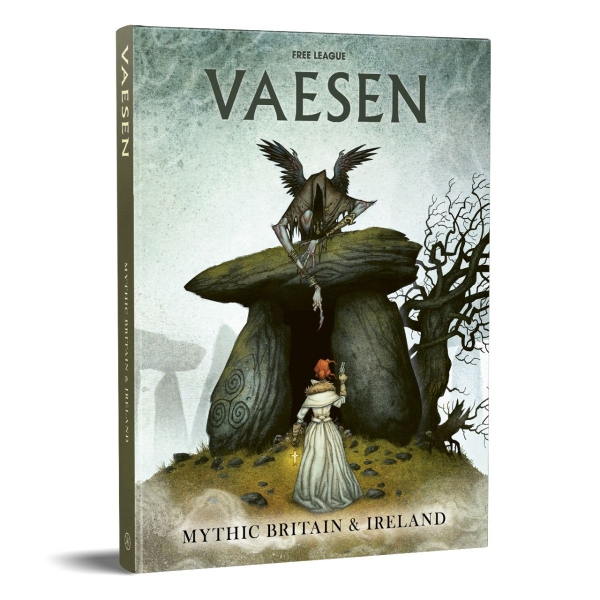 A mega bundle of Vaesen goodness.

One last step to go!

Share your email, we will send you an invite!

If you're already have a PledgeManager account from another project, just sign in using the button below to join the project.

Complete your information below and we will send you an email to get started!